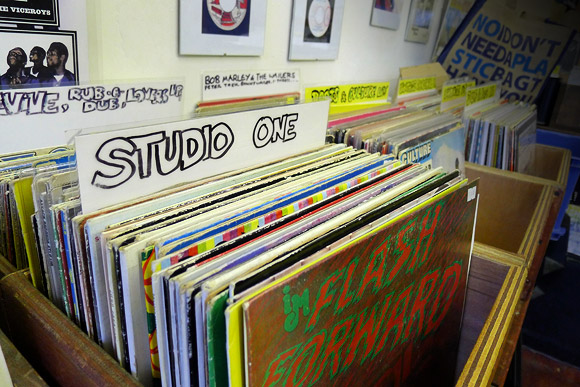 I have a vinyl record collection of approximately 2,000-3,000 vinyl lps and singles. If you recall from an earlier post, my good friend, Tony, was gracious enough to give them a home in his garage in New Jersey. There they have languished while I traveled the world being Jamaican on Saipan, Singapore, Laos and China!

I’ve always mentioned that when I escaped from America in 2006, that I sold or gave away most of my possessions before jetting to Saipan. I lied. Because Tony is a friend, “giving” him the records was not really that difficult, since I knew that I could reconnect with them if need be. Well, that might be about to change–sort of. Tony wants his garage back, and as I’m about to escape from New York again to head back to Saipan, I’ve got to find them a new home, and cut the final tether. What to do????

And then, it hit me. Those vinyl records were accumulated while I was, Sir Walt, the on-air host of “Reggae Riddims” on WKCR-FM–Columbia University’s radio station. Perhaps I could donate them to the station! It seems like a good idea! They would have a good home. Rather than sitting in a garage, they could be providing enjoyment to many. And, if I set the terms of the donation correctly, I could have access to them at some point in the future without fear that they’d be sold or discarded.

I contacted the current student board of the station, and will likely have an initial meeting next week with the show’s current DJ for him to check out what I’ve got and to assess the offering! Stay tuned!

However, I’m still keeping my options open. If anyone wants to bid for a collection of Reggae from Jamaica/UK/Japan from the 70’s to mid 80’s–classics, collector’s items and rarities, send me an email! Well, I’ll probably keep some of the rarities for myself, but I can be bribed!