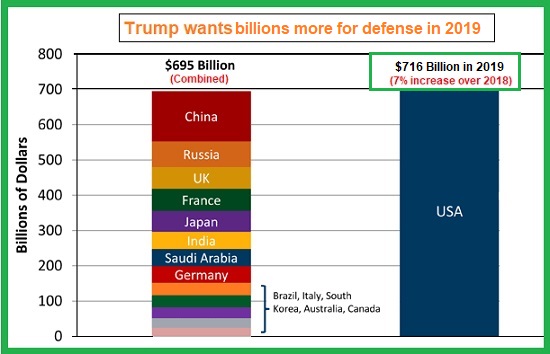 As Russia infiltrates our online infrastructure and as China quietly buys up the Third World, America seeks to achieve invulnerability by creating a massive military force.

That’s like a cave man shaping a bigger club to protect himself from nerve gas.

These are complicated times, and a military budget nearing a trillion dollars won’t necessarily protect us from our enemies or enhance our global dominance.

America is under attack in subtle and surreptitious ways, and I wonder whether our leaders are prepared for this kind of warfare.

How much of that defense budget is earmarked for Florida’s breached voting records?

How much will go to shielding the nation’s power grid from hackers?

What’s being done to determine and reverse the apparently numerous cyber assaults by the Russians?

With a Manchurian Candidate in the White House and Congress cowering before him, I suspect such concerns will receive little if any attention.

The big bucks will  go to updated aircraft carriers and ballistic submarines… showy props like that. And the budget scarily includes new nuclear warheads.

And it’s creating a massive National Debt in the process.

To maintain its lavish spending on arms, America is undermining its economic stability and starving essential domestic programs.

In the complex struggle for world dominance, China and Russia are gaining ground while America’s influence is waning.

And Trump’s ham handed reality show is doing nothing to change the trend.

More on US military budget