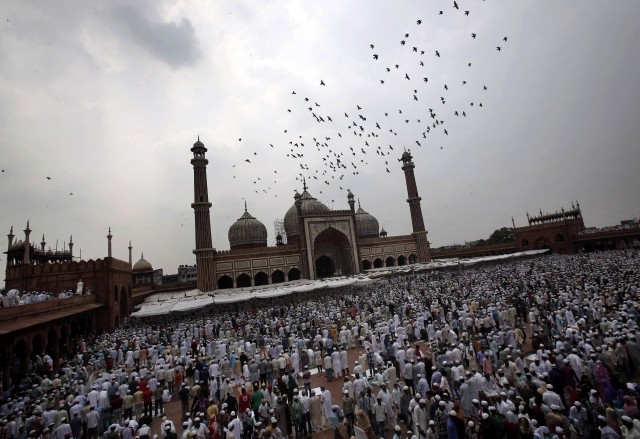 As I mentioned in a previous blog post… almost every week there is a holiday in India.

I suppose that’s to be expected in a country of 1.1 billion people with at least eight major practicing religions.India is the second most populous Islamic nation in the world and Muslims form India’s largest minority and constitute almost 12% of the country’s total population.

Eid ul-Fitr falls on the first day of Shawwal, the month, which follows Ramadan in the Islamic calendar. Before the day of Eid, during the last few days of Ramadan, each Muslim family gives a predetermined amount of food as a donation to the poor. This ensures that those in need will have a holiday meal and be able participate in the celebration. This donation is known as sadaqah al-fitr (charity of fast-breaking).

Fasting during the month of Ramadan, according to Islamic beliefs, helps in developing self-control and is a way of getting closer to Allah. Women prepare sweets at home and wear new dresses on that day. Eid ul Fitr is synonymous with joy and thanksgiving. Such is the spirit of this festival that many non-Muslims participate in Eid celebrations in India.

On the actual day of Eid, Muslims gather early in the morning in outdoor locations or mosques to perform the Eid prayer. After the Eid prayer, Muslims visit  family and friends, give gifts, and call relatives to give well wishes for the holiday. These activities traditionally continue for three days. In most Muslim countries, the entire 3-day period is an official government/school holiday and it is the same here in India.

Eid ul Fitr or the ‘festival of fast breaking’ is the most celebratory of all Muslim festivals. The term ‘Eid’ has been derived from the Arabic word ‘oud’, which means ‘the return’ and hence, signifies the return of the festival each year. Legend says that the Qur’an was revealed to Prophet Mohammed in the last ten days of Ramadan. The month of Ramadan is historically associated with two important victories of Prophet Muhammad – the battle of Badr and the conquest of Makkah.

Muslims stand after offering last Friday prayers at the Jama Masjid (Grand Mosque) ahead of Eid-al-Fitr in the old quarters of Delhi, 17 August 2012. Eid-al-Fitr marks the end of Ramadan, the holiest month in the Islamic calendar, and is scheduled to be celebrated in India on 20 August

Ramadan is an invitation to thoughtful contemplation, but also to reflection on our relations with our fellow man and to sympathy for the well being of other peoples and cultures.

For many Muslims now, their celebration of Ramadan is overshadowed by political uncertainty or even violence. My thoughts go out to those Muslims today. Especially those who are refugees and have been separated from their families and will not be able to partake of the Festival of Breaking the Fast in a peaceful environment at home with their loved ones.

My Ramadan wish today would be for an end to the violence and that all may celebrate in peace.

A blessed and peaceful Eid‑ul‑Fitr to all!